Located directly on the border of Herndon, VA and Sterling, VA, right off Route 28 and the Dulles Toll Road, our award-winning dog grooming, doggie daycare, and boarding kennel is central to Reston Town Center, Ashburn, and Dulles Airport. The facility is also a short 10-minute drive from the Chantilly – Centreville, VA area.

We look forward to meeting you and your best friend! 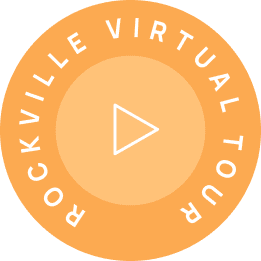 Healthy Hound Playground Sterling offers the largest dedicated doggy play areas in Northern VA. Your dog will be sure to have plenty of space to run and play safely with constant supervision. Regular outdoor potty breaks help reinforce at-home habits and our spacious kennels will afford evenings spent in total relaxation, while our overnight attendant gives parents peace of mind. 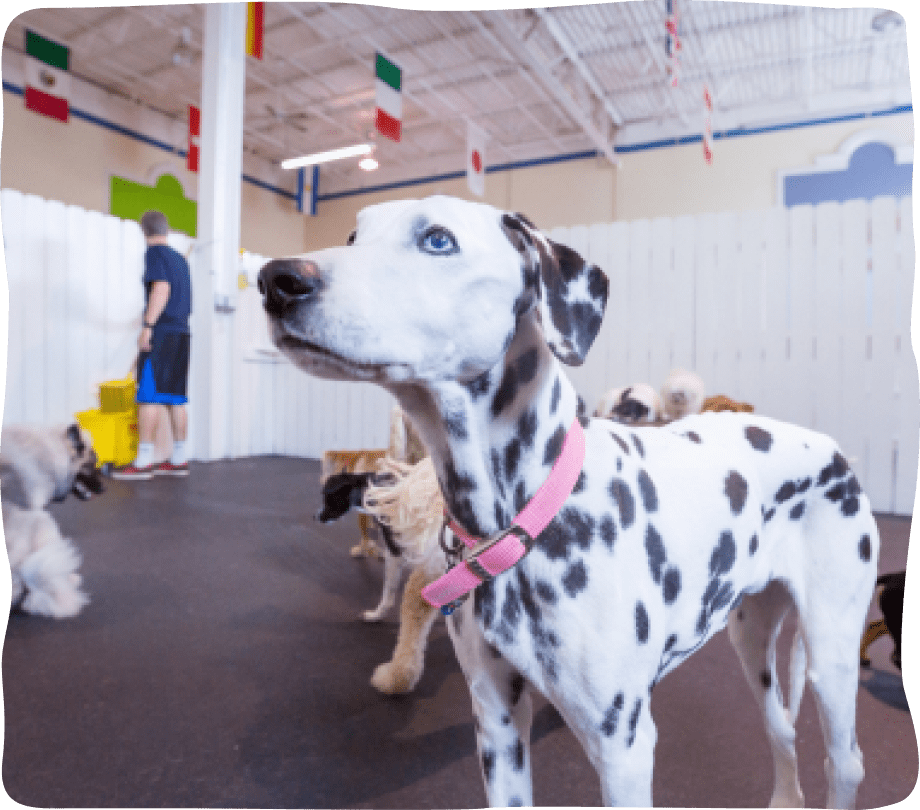 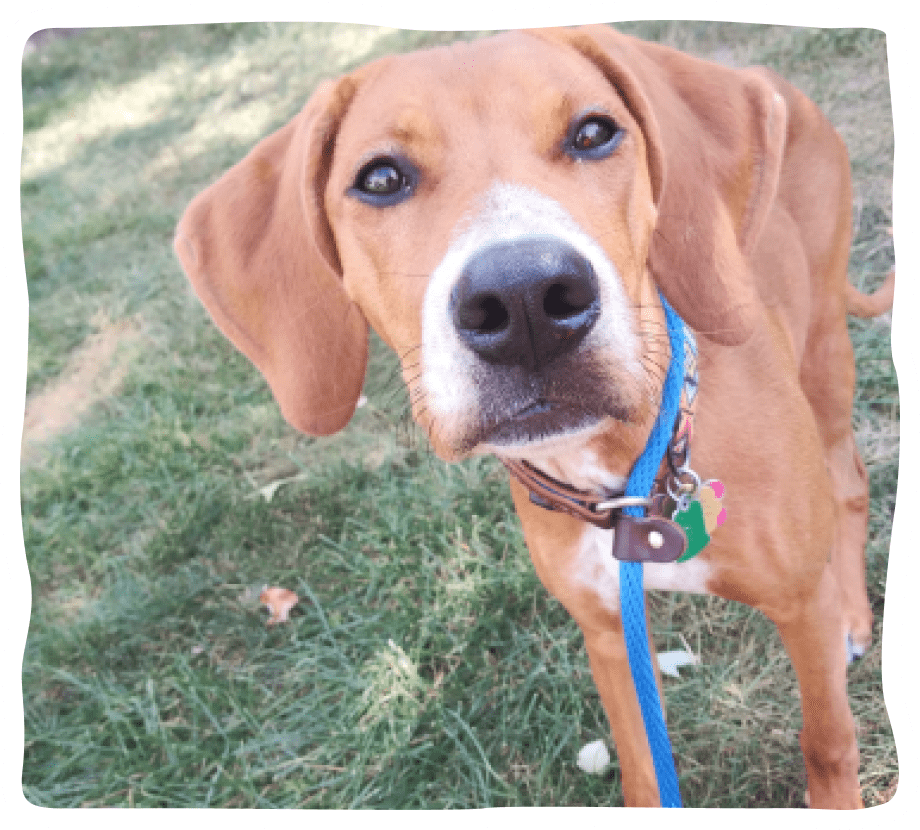 Our state of the art grooming facility is run by 20+ year grooming veteran and master stylist, Tonya Jarrell. With our array of spa options, your pup can enjoy a spa day any day! 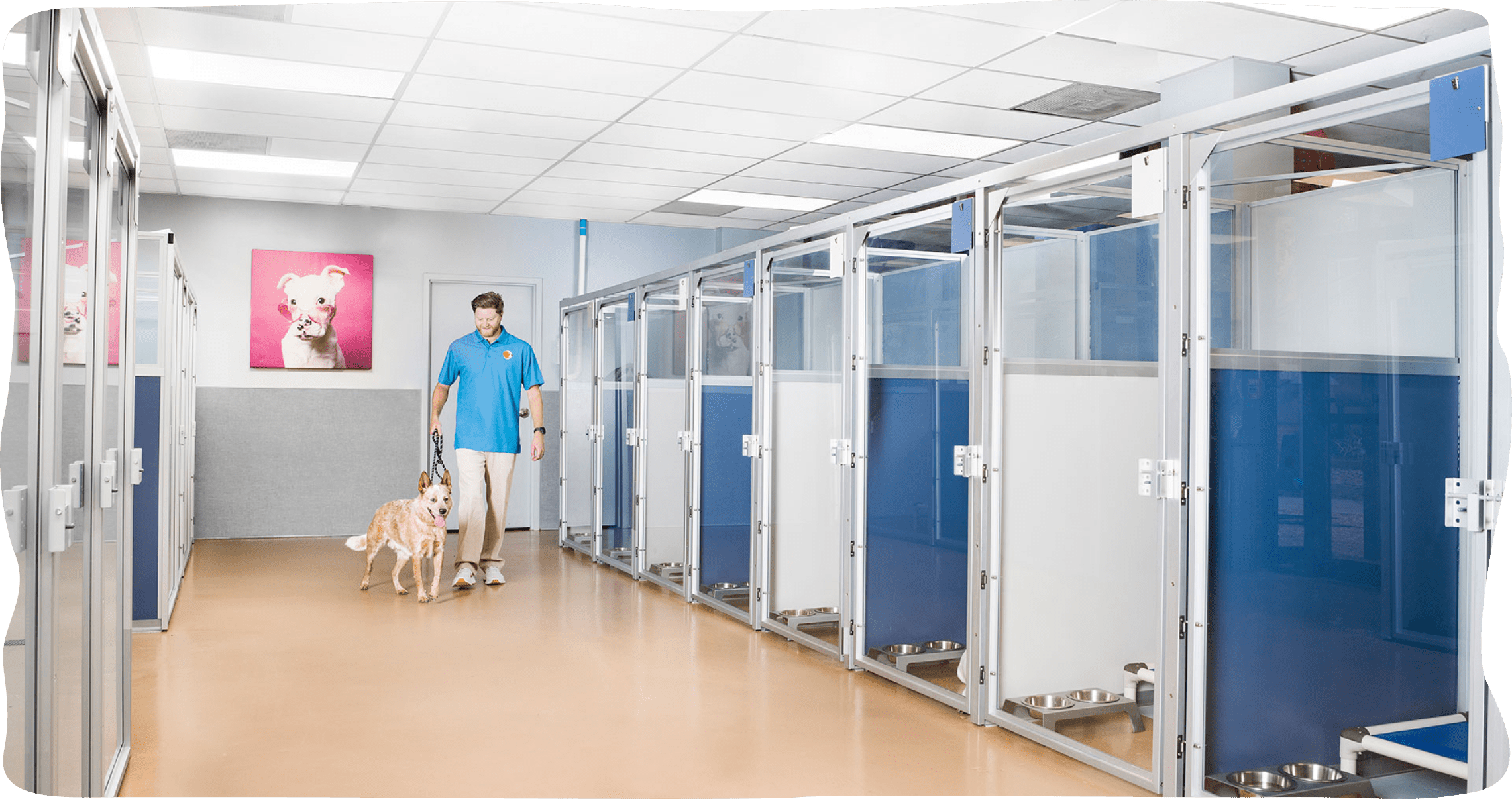 Drop-off after 5pm (close at 7pm) and you will not be charged for daycare for the day of drop-off – just the nightly fee ($40).

Pick-up before 9am Monday thru Saturday (open at 7am) & before 11am Sunday (open at 9am) and you will not be charged for daycare for the pick-up day.

Note: After grace periods are over, normal charges are in effect.

Let our professional groomers style your dog any way you want!

Poodles and Doodles are priced differently from other breeds due to the increased length of time our groomers spend working on their intricate coats. We want to ensure every poodle and doodle is returned to mom and dad looking ready to walk the red carpet.

Haircuts generally take 2.5 to 3 hours to complete from drop off time.

Make your Dog Pop at our Grooming Shop!

Our Basic Bath consists of a relaxing, oxygen-infused cleansing for your pup, using our signature shampoo. Then, a gentle towel and blow dry, finished off with a thorough brushing.

Get your Groom on at our Dog Salon.

Is excessive shedding an issue with your pup’s coat? We’ve got the solution!
This upgrade includes our highly effective de-shedding shampoo and conditioner, a gentle scrub with our specialized tools, and is finished off with a de-shedding brush and blow-out.

Leaves the coat bright and shiny, highlighting whites.
With our special brightening shampoo and conditioner your dog’s coat will come out bright and shiny with whites in their coat appearing highlighted. Your pup will also be pampered with our Blueberry Facial, which both cleanses and helps to remove tear stains. Your dog’s spa day will be completed with a gentle tooth brushing to enhance those pearly whites.

Is your dog itching, scratching, or scooting? Let us help relieve the itch!
Your dog will receive a soothing spa bath with our medicated shampoo to relieve itchiness from a range skin conditions including those associated with yeast and bacteria. A deep conditioner will then be applied to calm the skin and prevent dandruff.

Black as Night
Intensifies the black and blue while helping to eliminate red tones, brassiness, and sun fading. 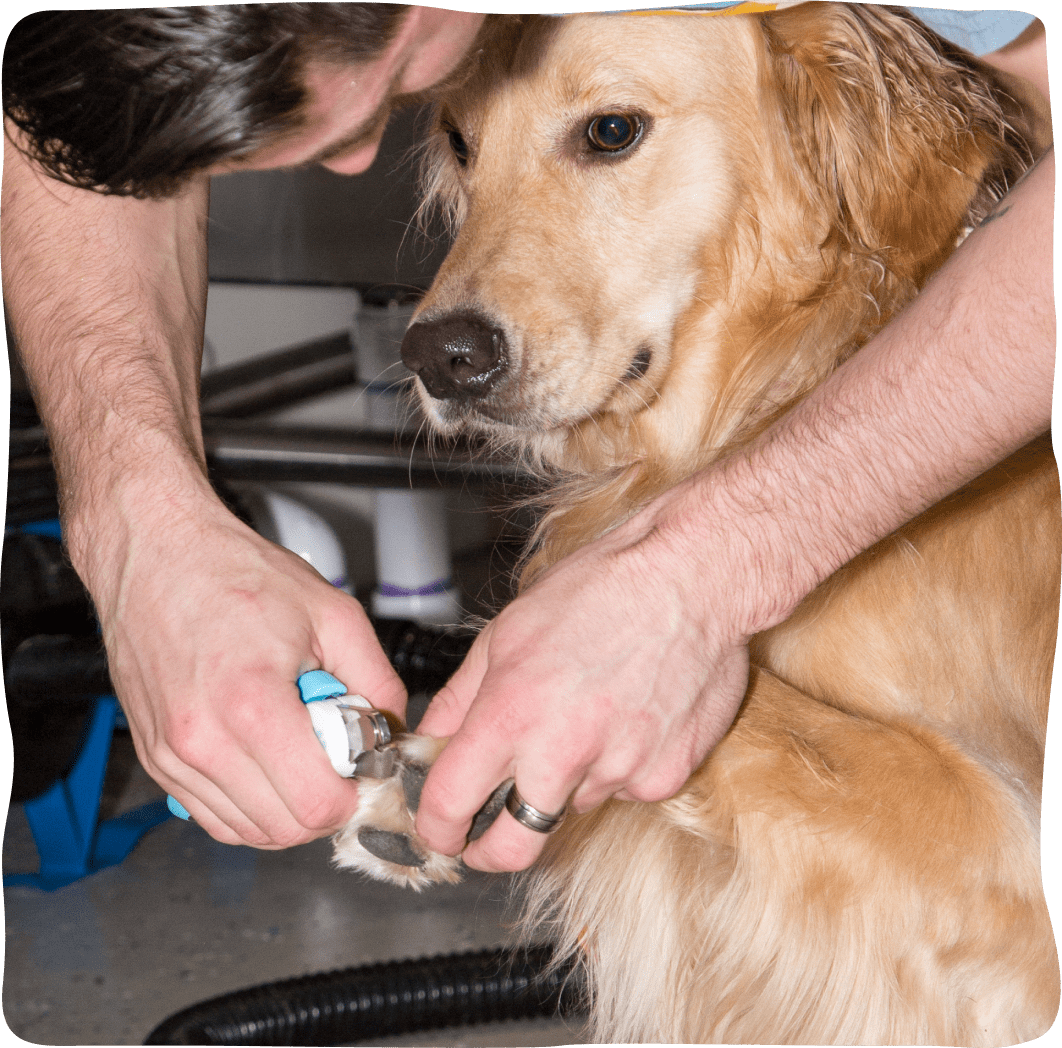 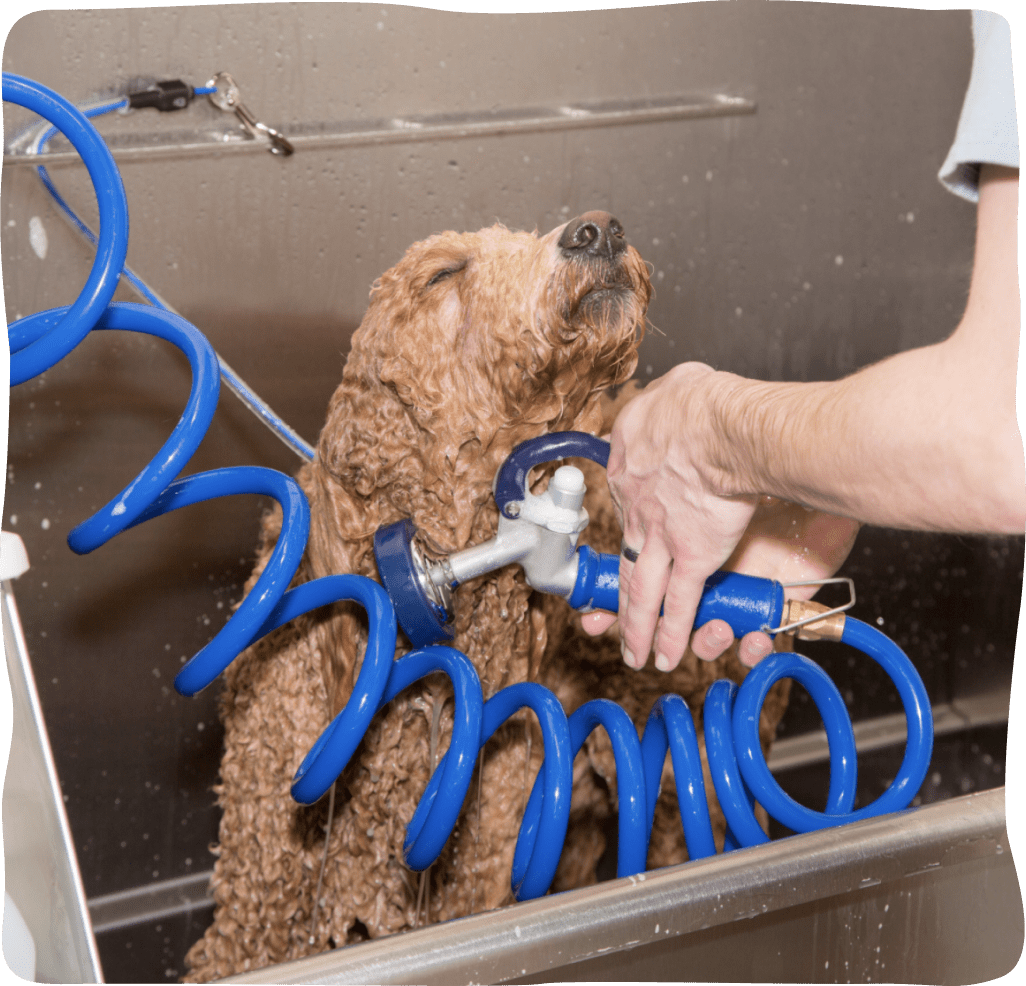 At Healthy Hound our goal is to provide a 5 star experience for you and your pup! If you are not satisfied with your experience at our facility, please let us know directly so we may address it.

To contact Healthy Hound Playground and Grooming Salon & Spa, please feel free to call, email, or come see us at one of our locations listed below. As a dedicated and hardworking doggy daycare, boarding, and grooming center we strive to provide the best possible experience for you and your pooch. 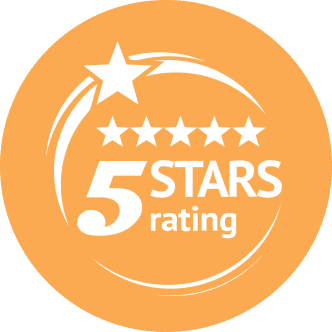 In the words of our clients

Get inspired by these stories.

My dog and I both love Healthy Hound Playground! Everyone who works there is wonderful and clearly loves dogs! My dog is a rescue from a rural kill shelter who had not had a lot of contact with people or other dogs. Everyone there is so kind, and their facilities are well-maintained and perfect for my dog's socialization. Also, they walk your dog outside at regular intervals. I highly recommend Healthy Hound Playground.

Both me and my dog (Kacee) LOVE Healthy Hound Playground! I ask Kacee in the morning if she wants to go see her friends and she gets so excited! She is always happy to see the staff there and they are happy to see her too! She is even happier leaving then she is going in, and much more tried to boot! She has always been a little shy of meeting people on the street, but goes right up and loves the staff when she sees them. Healthy Hound Playground is not just a local business but a key part of my dogs happy life! Highly recommended!

Our dog LOVES LOVES Healthy Hound. She practically jumps through the door from the second we get there so she can start playing with all her friends. I really like that the dogs get walked every few hrs so they can go take care of business outside and the staff is great across the board. We will never take our girl anywhere else.

*I'm thanking my lucky stars today and need to do a few shoutouts!

We almost lost (our dog) last night. Only a few hours after landing in New Orleans for a work trip, I received a call from where we daycare/board the dogs. The guy on the other line said he thought Odin had bloat and he thinks he needs to rush him to our vet, Blue Ridge Veterinary Associates

(about an hour away). I told him to GO immediately and I called the vet where they would be ready and waiting. Shane was 2 hours from  the vet as he was traveling home from Michigan. Once he got there it was confirmed Odin had gone into bloat and his stomach had twisted and he was back for emergency life-saving surgery. Alex from Healthy Hound Playground and Grooming Salon & Spa was still in the waiting room when Shane got there (hours later). If Alex hadn't been paying attention to Odin’s symptoms and signs of distress, he wouldn't have made it another few hours... bloat is no joke and timing is not on your side. I always hate when we have to leave the boys, but Odin was exactly where he needed to be and I can't thank Alex at Healthy Hound and the amazing Blue Ridge staff enough!! I highly recommend Healthy Hound and Blue Ridge more than ever!!! They all helped to save the big man’s life and I'll forever be thankful.

*My rescue pup practically knocks down the front door at HHP trying to get in, and when I pick her up, she is happy to see me but immediately turns around and tries to go back into the enormous play area to continuing having fun. I love that the folks I speak with at HHP know, love and enjoy my dog, AND can give me information on how well she behaved while she was there. The "Party Inside, Potty Outside" philosophy at HHP is hugely beneficial for dogs like ours who lived for a long time in a shelter situation and were not properly potty trained. Our dog was still not housebroken at 7 months old when we adopted her and training her to potty outside was a very challenging process. Based on my experiences with my other dogs at different facilities, I am certain that a week long stay somewhere without the same commitment to taking the dogs outside would have caused her to backslide. (Not a fun way to "celebrate" coming home after vacation!) The diligence of the HHP staff in taking the dogs outside ensured Lark kept her hard-earned "house manners".

*After 14yrs with another kennel we tried HHP. I was a little nervous but as soon as we walked in I knew my pups were in good hands! It is a very friendly clean environment and the staff were very understanding and gave me a personal full report when we picked them up. I really appreciated the fact that they took beds, toys, and leashes. At pick up they returned everything just as it was. It is the first time we have picked up our dogs and they weren't over excited to leave! I'm considering doing doggy day camp now!

My mini-goldendoodle Teddy has been going to Healthy Hound anywhere from 1-3 times per week since he was 6 months old. As soon as we turn down the street he starts barking and howling. Teddy is now 19 months old and loves his doggy daycare. He is excited when he walks in and he is exhausted when he leaves. We have used the playground for boarding as well and it has been a great experience. The staff and owners are friendly and always greet Teddy and I as we come in. As a first time dog owner I never imagined sending a dog to daycare, now I can't imagine not doing that. It has become the highlight of his week. As soon as I tell him he is going to the playground he will follow me around the house, wagging his tail, until it is time to leave. Many times he will just sit in the car waiting for me!!!

I discovered Healthy Hound last spring. I was in desperate need for a daycare that would welcome my nervous basenji. They welcomed gizmo with open arms and made sure him and all the other dogs got along. I wouldn't trust my dogs with any other daycare in the Nova area. They are reasonably priced and I love that someone is there 24-7.

This is such a wonderful facility!! My Cinnamon absolutely LOVES coming here to spend the day playing with her canine friends!! (She loves the human ones, there, too!) She's now a regular bi-weekly visitor, and is even starting to understand when I tell her "we're going to Healthy Hound today" and starts wagging her tail!!

Brandon and his team are just terrific, and I know Cinnamon is in very good hands. After a day of playing, she comes home exhausted, healthy and happy -- JUST the way I want her to be!!! I absolutely would highly recommend Healthy Hound Playground to other canine parents!!